Finding new ways to increase efficiency can be beneficial. At some point though, it can turn to laziness. This is what happened to me.

A few weeks ago I realized that I had been trying to make everything as efficient as I could. And it had been going on for some time.

At each and every corner, I would try and come up with some clever way to make some process, job, idea, more efficient. And by efficient, I'm not just meaning quicker. I'm meaning take the load off of me and put it onto some computerized task. If I couldn't do that with a task, I would try to avoid doing it. Not good.

The quickest way is not always the best way. And I wasn't doing things the best way. I was no longer getting down and dirty and putting in the required effort for a particular job.

My intentions were good but the results weren't. Sometimes there is just nothing better than getting in there and taking the manual route. Taking the more labor intensive road and doing the work by hand. I'm wasn't proud of this over-efficiency. And that's why I sought change.

Since I've had this realization, I've changed quite a few things. And it's for the better. I've tried to slow down and appreciate little things. I've gotten up and done the hard things.

I've also started writing by hand a lot. I began filling up my Moleskine that I've had laying around for a few years and I'm loving it. I also bought a Field Notes pack and carry one with me everywhere I go. It's gotten me to start thinking more again. It's encouraging. It's bettering. And it's bringing me happiness. Odd, probably, to some.

Others will get it.

I've also started working more with my hands again. Moving away from technology, not giving it up completely, just using and making more physical things.

I'll be posting more about what I've been up to, as well as my thoughts on things in the coming weeks.

If you want to get in touch with me or have any comments about what you've read, feel free to reach out on Twitter. [@flyinthecoop](http://twitter.com/flyinthecoop)

With everything going digital and many people being on a computer all day at work, it's easy to get stuck into a paperless mindset. I'll tell you what though... paper 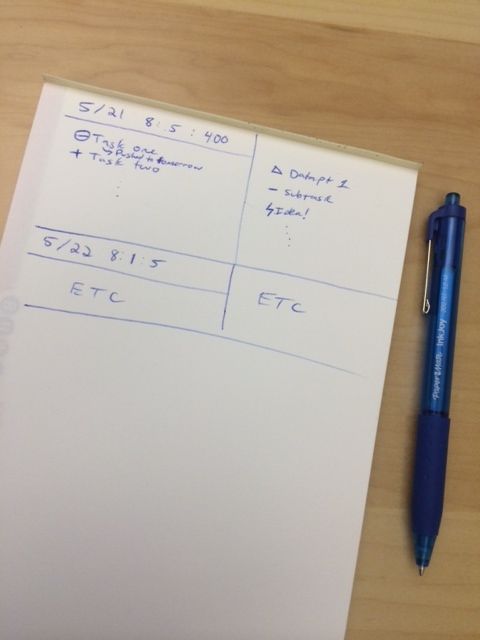 I [recently posted](http://flyinthecoop.com/how-i-fixed-my-task-lists/) about Patrick Rhone's Dash/Plus System for task tracking. Today I'm sharing how I've implemented this system into my existing workflow. Each morning,